I have just finished a PhD under the supervision of Stanislas Dehaene at PSL/Collège de France and NeuroSpin, CEA. I’m interested in humans’ striking ability to manipulate highly abstract structures, be it language, mathematics or music. My work focuses on the perception of geometry, seeking traces of the ability for abstraction in a domain attested to be extremely old: homo erectus already carved abstract geometrical patterns half a million years ago, while other non-human primates seem unable to produce such shapes.

My work relies on experimental psychology to answer specific questions: are certain shapes processed faster and perceived more accurately than others? Even when matched for low-level perceptual features? What characterizes such shapes, and why? We’ve run comparative experiments with French adults at a large scale, together with behavioral data from preschoolers, uneducated adults, and neural networks. This work is moving toward incorporating neuroscience methodologies to answer new questions: EEG in babies to get even more naive participants, and fMRI & MEG in adults to look for perception-independent representations of geometrical shapes.

I also have strong interest in the topics below:

See dedicated page, which I used when TAing logic to Philosophy and Cognitive science ENS students in their first year of Master Degree.

After studying math, physics and computer science in prep. classes in France, I entered École Normale Supérieure (ENS) de Cachan in Computer Science where I finished my License (BA) and my first year of Master. During my masters I spent six months in Oxford, UK doing theoretical computer science under the supervision of Luke Ong, working on the semantics of various λ-calculi.

I then took a gap year sailing 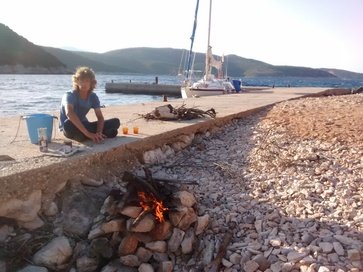 A dinner on the island of Ligia, Greece during my gap year. Boat in the background, Félicien Comtat in the foreground.

and decided to focus on cognitive neuroscience: I applied for the CogMaster and worked with Stanislas Dehaene on geometrical sequences. Between that year and my PhD I spent six months at École Normale Supérieure working under the supervision of Salvador Mascarenhas on the links between reasoning and language, as well as six months at MIT under the supervision of Josh Tenenbaum working on program induction and more specifically applying it in the domain of geometry.

I have been co-advising, together with my own supervisor, the M2 internship of Maxime Cauté. He is exploring cross-modal representation of sequences of parametrized complexity using language-of-thought models.

I have been directly contacted and have provided reviews for the following journal and conferences:

I use almost exclusively free (libre) softwares, to which I contribute when able to. I have submitted fixes, implemented features and documented bugs in the following neuroimaging softwares ecosystems: nilearn, mne, fmriprep. Code for my models, analyses and experiments are systematically published alongside articles, typically on Open Science Framework.

I’m an avid climber, a competent sailor and an adequate handyman. Occasionally I get hooked into tinkering with various programming languages, electronic projects, neural networks models, etc., and when in luck I write about it. Selected examples here: